Take the Ginkgo Biloba tree and the herb, Horsetail.  These are two of the oldest plants on our planet, said by science to have been around as far back as the dinosaur days.

Aspartame and genetically modified soy have been around for about 0.00000001% of that time. 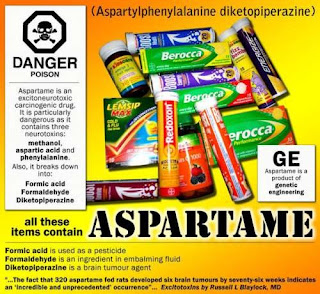 Which of those two sets of edibles would you say your human DNA is better suited to handle?

There's this long, slow organic winding evolutionary trail that begins with the Big Bang and, over eons, goes through very long, slow metamorphoses to which life forms adapt, change and evolve. Then we get to our little eye-blink of post-modern, technological time where we VERY SUDDENLY introduce into organisms which are the crowning glory of 14 billion years of evolution, a relentless cascade of synthesized chemicals --preservatives, additives, colorants, pesticides, fungicides, herbicides, artificial flavors, flavor enhancers, excito-toxins, neuro-toxins, coagulants, surfactants, stabilizers on and on and on and we haven't even mentioned pharmaceutical drugs, illicit drugs and cosmetics, the latter of which we 'ingest' through our skin.

If you think the above list is alarmist or an exaggeration, go to:
http://www.yourtruhealth.com/page/1/default.asp
and check out the A-Z listing of the additives that  have entered our food chain. Many are natural, or derived from natural sources, but hundreds are synthesized compounds and/or chemicals which have been demonstrated to be harmful.  Two obvious examples are Mercury and Fluoride.  Evidence of their harmfulness is so ubiquitous that a simple Google search on either one will make you wish you had never listened to your dentist.

Big Bang Cuisine, is inspired largely by the Paleo Diet approach to eating and by certain tenets of the organic raw foodist movement. The content is for information purposes only and is in no way meant to diagnose or treat illnesses, nor to substitute for the services of a bonafide health care professional.  A whole other blog could be launched just to define exactly what 'bonafide' means in this context.